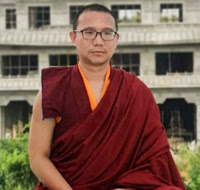 Khenpo Tsondru Sangpo was born in Northwestern Nepal in Mugum Bazaar. When he was eleven years old he was ordained by Kyabje Chökyi Nyima Rinpoche at Ka-Nying Shedrub Ling Monastery, in Boudhanath, Nepal. He completed his basic studies in the monastery’s elementary school, memorizing many texts and receiving the visual transmission of the monastery’s tradition of chanting. He received novice and fully ordained monastic vows from Kyabje Tenga Rinpoche. In 1998 he began his studies in the monastic college, the Sangye Yeshe Higher Shedra. He studied in the Shedra for ten years, training in the traditional way, via learning and reflection, on texts related to sutra- and mantra-level Buddhism as well as general fields of study. After a number of years of study he became a teaching assistant in the Shedra. He completed his Shedra studies in 2007 and became a Lopon, teaching in both the Sangye Yeshe Shedra and the Rangjung Yeshe Institute and handling management responsibilities in the monastic Shedra. In 2013 he was awarded the title of Khenpo. Currently, he is teaching to people who are interested in Buddhist teachings, both ordained and lay, from both East and West.