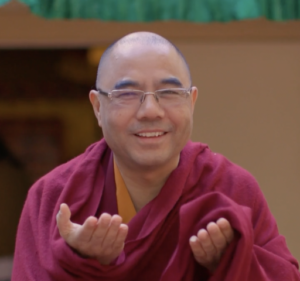 A senior monk and chant master at Ka-Nying Shedrub Ling monastery in Kathmandu, Lama completed a traditional three year retreat under the guidance of Tulku Urgyen Rinpoche.  He currently trains the younger monks at the monastery in the practice of the ritual arts. 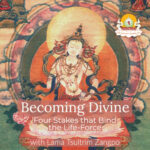 In this 4-part online series, Lama Tsultrim Sangpo will unpack an essential aspect of tantric practice—the development stage. To properly realize our innate nature through sadhana practice, the great masters from Guru Padmasambhava down to our present teachers emphasize the necessity of “binding the life force” of the deity through planting four “stakes”. These four points condense the essential methods of the development stage, and thus allow us to truly take hold of the deity—our own deepest nature. Lama Tsultrim, a master himself in all aspects of tantric ritual practice, will guide us through an in-depth exploration these four stakes… 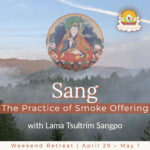 Sang is the Tibetan Buddhist practice of offering precious incense to clear away obstacles and gather auspicious conditions for our Dharma practice. While the benefits of this practice are well known, the proper method for doing so is rarely taught in detail. Therefore, in this weekend workshop, Lama Tsultrim Sangpo will guide us in how to correctly offer sang, using The Condensed Smoke Offering liturgy from the Guru’s Heart Practice that Dispels All Obstacles (Tukdrup Barchey Kunsel) as a basis. Guru Padmasambhava himself extolled the benefits of sang practice as follows: “When done regularly, and especially to create auspicious circumstances… 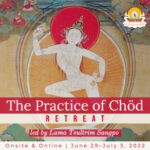 Chöd, or “cutting through,” is a profound practice which cuts to the heart of wisdom and compassion. Traditionally attributed to the eleventh-century female practitioner Machig Labdrön, it is prevalent in many Tibetan Buddhist lineages. Combining the view of the Prajnaparamita sutras with tantric visualization methods, chöd is a direct meditational approach to severing ego-clinging. Chöd practice is also known for its hauntingly beautiful melodies, and has traditionally been used as part of Buddhist healing rituals. Chökyi Nyima Rinpoche has repeatedly emphasized the importance of practicing chöd, and of perfecting our understanding of both its profound meaning and its lineage of… 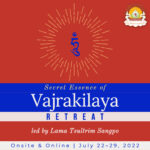 The Sangtik Phurpa (Secret Essence of Vajrakilaya) practice belongs to the treasure teachings that were hidden by Guru Padmasambhava for the disciples of this time. In 1859 on the 8th of August, at the retreat hermitage of Jamgön Kongtrul Rinpoche in Tibet, Chokgyur Dechen Lingpa revealed the practice of Sangtik Phurpa as part of the three inner secret essence cycles of Vajrasattva, Yangdak Heruka and Vajrakilaya. Among the Vajrakilaya revelations of Chokgyur Lingpa, the Sangtik Phurpa is considered the highest (Atiyoga) practice of Vajrakilaya. Since it is very effective in removing outer and inner obstacles, is easy to practice, and…