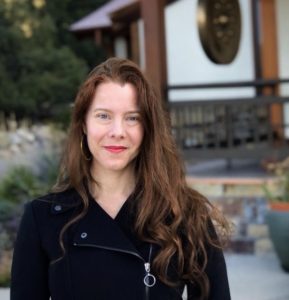 After receiving a BA in Religion at Middlebury College, Catherine moved to Kathmandu, Nepal in 2001 to continue her studies of Tibetan Buddhism.  From 2003 to 2011 she worked as an oral interpreter and Tibetan language instructor at Kathmandu University’s Centre for Buddhist Studies and directed the Centre’s Translator Training program for several years.  Catherine received an MA degree in Buddhist Studies from the Centre in 2008.  She has been a member of the Dharmachakra Translation Committee since 2005, and her published translations include Middle Beyond Extremes (2005), A Practice of Padmasambhava (2009), Vajra Wisdom (2011), and the Lalitavistarasūtra (2013). She completed her PhD in Buddhist Studies at UC Berkeley and is currently a professor at Kathmandu University’s Centre of Buddhist Studies at Rangjung Yeshe Institute.

At the express wish of Chokyi Nyima Rinpoche, long-time translator and Rangjung Yeshe Institute faculty member Dr. Catherine Dalton will lead an online course focused on “The Treasury of Blessings” sadhana of Shakyamuni Buddha. Composed by Jamgön Mipham Rinpoche’s (1846-1912) and widely considered to be a “mind-treasure” (gongter), this sadhana is both poetically rich in composition and totally complete in its practical framework. Furthermore, Chokyi Nyima Rinpoche has extensively praised its qualities and provided teachings to unfold its depths. This course will proceed in two parts. In the first part we will engage in a linguistic approach to the sadhana… 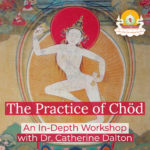 The Practice of Chöd: An In-Depth Workshop
Open Dates

Chöd, or “cutting through,” is a profound practice that cuts to the heart of wisdom and compassion. Traditionally attributed to the eleventh-century female practitioner Machig Labdrön, it is prevalent in many Tibetan Buddhist lineages. Combining the view of the Prajnaparamita sutras with tantric visualization methods, chöd is a direct meditational approach to severing ego-clinging. Chöd practice is also known for its hauntingly beautiful melodies, and has traditionally been used as part of Buddhist healing rituals. Chökyi Nyima Rinpoche has repeatedly emphasized the importance of practicing of chöd, and of perfecting our understanding of both its profound meaning and its lineage… 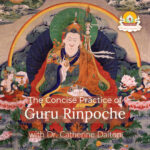 In this online workshop, Dr. Catherine Dalton will elucidate the profound meaning of the Tibetan text of the Manual for Concise Daily Practice (Gyünkyi Köljang), revealed by Chokgyur Dechen Lingpa as part of his Dispeller of All Obstacles (Tukdrup Barché Künsel) treasure cycle. This simple, essential practice focuses upon Guru Padmasambhava, known affectionately as Guru Rinpoche, crowned by Avalokiteshvara, embodiment of compassion, and Amitayus, Lord of Infinite Life. It is said in Guru Rinpoche’s own instructions that the most powerful way to dispel obstacles is to pray to the guru—the master who embodies all the awakened beings of past, present,…